Although market volatility can have a significant impact on the success or failure of an ICO, it turns out that most of the factors which impact the success rate of blockchain projects are entirely within the control of the project’s founders. I have included these controllable factors in what I call the ICO Success Framework (“ISF”), a summary of which is presented below. 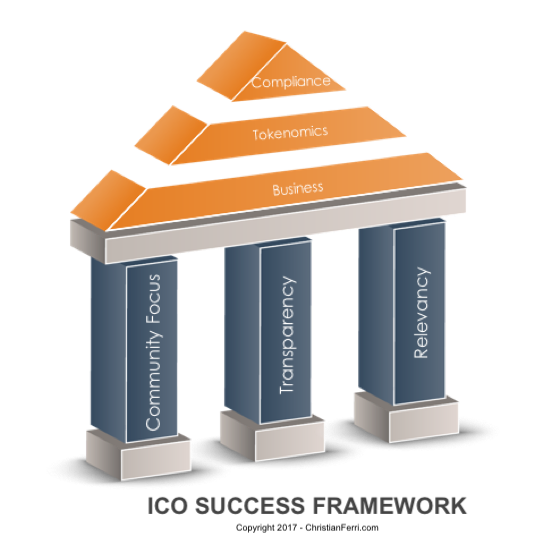 As you can see in the info-graphic above, the ISF is composed of a foundation of three pillars upon which are laid three additional building blocks. In order for an ICO Success project, it is critically important that all six of these components are clearly established and constantly assessed for improvement. More detail on each of them follows.

The Foundation of ICO Success (3 Pillars)

Before investing in the building materials of your project, ensure that you have a solid foundation upon which to build, composed of the following 3 “pillars”:

1. Community Focus – Just as your individual success has depended upon the support of your personal community (e.g. family, friends and extended network), so too the ICO Success will depend on the support of the community you build around it. It is important to do everything with the community in mind. An ICO Success project without a strong community behind it is simply a crowd sale without the crowd (i.e., you probably won’t reach your target raise).

2. Transparency – Blockchain technology is by its very nature decentralized and transparent. Your ICO project (and how it is run) should follow the same principles. Allow your community to see the good and the bad as your project moves forward. They understand that no project is perfect and will appreciate your candor, especially when things get tough. However, if you betray them by not being completely transparent, you will lose them. And if you lose them, you will fail.

3. Relevancy – Dozens of new ICO projects are being developed daily, so being (and staying) relevant is essential in order to stand out from the competition. Long-term sustainability starts by making the right decision today and then constantly challenging what you’re doing: Why are you using blockchain? Why are you raising money? Why are you launching an ICO? You should be able to answer all of these questions without hesitation. If you can’t, go back and figure out why. Without relevance, your project is simply a commodity that can be easily replaceable.

Once you have a solid foundation in place as outlined above, it’s time to start building, applying these 3 “building blocks”:

1. Start with the business – You’re an entrepreneur. Entrepreneurs build companies, not ICOs. In the 1990s and early 2000s, entrepreneurs said they were “launching start-ups.” In 2018, entrepreneurs say they are “doing an ICO,” but this is a misnomer because an ICO is a fund-raising vehicle, NOT a company. Don’t focus on the token sale. Spend your time on getting the business mechanics right.

3. Abide and Govern – Compliance is another area that is too often overlooked, but can completely undermine an otherwise successful project. I have covered this topic in another article available here, but the three questions you need to ask yourself are:

a. Is my token an investment vehicle?

b. Does my token have utility? Or even better, does it have exclusive utility?

c. Is my TGE/ICO being used to access something concrete?

As has been clearly demonstrated in the past several months, the cryptocurrency market is nothing if not volatile. By following the ICO Success Framework presented above, you can help to ensure that your ICO project will still be successful even when the markets are not.